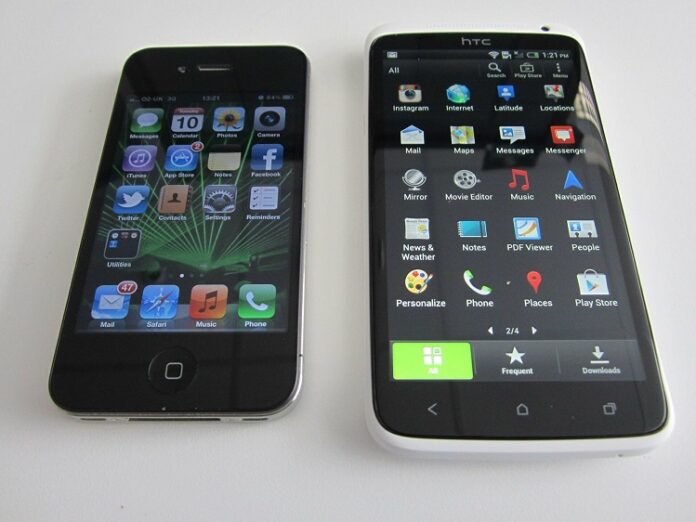 Researching reviews on cell phones is a great practice to live by before buying a new phone. After have owned the HTC Evo and the Apple iPhone 4S, I have decided to critique and compare each them. They both compare to each other in their own market of hardware and software. These are two of the hottest selling phones of today’s smart phone craze. There are some specific variables that one should look at when buying a new smart phone.

While owning both phones on the Sprint service, it is very prevalent that the HTC Evo got way better service and speeds. Because I had the Evo before the Iphone, I literally thought something was wrong with my iPhone itself. I then went to the Apple Store and returned it and got a brand-new phone. It turned out that the Iphone 4S was getting some complaints about data speeds. Maybe it has something to do with the sprint service but it was obvious that the HTC Evo had better speeds.

The call and service quality was also better on the HTC Evo. The volume on the android phone itself could get a lot louder when talking to people. After loosing that sound level with the Iphone, I somewhat miss that quality about the Evo. I know that there are volume boosting applications for the iPhone but I have not touched base in trying apps to try to boost the call volume.

The iPhone 4S has a lot better hardware than the HTC Evo. You can pretty much tell that when you start to use the iPhone 4S for daily searching. Not that I could slow down the Evo that much but the iPhone is inevitably faster with applications. While doing basic things like email and social networking, the iPhone was a lot faster when going through browsers and such because the hardware in better in the phone itself.

The iPhone 4S is known for the new Siri software integration. Which is a voice recognition software that runs on the phone and is driven by commands. The android phones claim that they have the same feature but, it doesn’t work even a quarter as well as the iPhone’s Siri does. Whatever is going on with Apple and voice recognition, their leap years ahead of android right now and that is simple as day to see. Siri is a phenomenal product and I use it on a daily basis.

All In All Which Is Better?

If you as an individual are heavy into social networking than the iPhone 4S is definitely for you. Things like Facebook and e-mailing and text messaging are going to run very well on the iPhone 4S. You can even use the voice recognition to display a lot of the text when it comes to that strenuous typing it all out. As far as music goes, there both pretty much the same. They can both do the same things with most media like music and videos.

The HTC Evo is close to as good as iPhone 4S but the iPhone is just a little bit better I would say. If the iPhone 4S did not have the slower speeds and the smaller screen I would say the iPhone would blow it out of proportion. HTC is going to really have to step it up for the new coming iPhone five to be able to run in the same market as the iPhones.

John Pasley - March 26, 2019 0
If you are an IT professional, you have probably come across the Information Technology Infrastructure Library or ITIL. You know exactly what it entails also. ITIL...

John Pasley - October 17, 2012 0
Almost everyone has set bill and spending budgets, and most people do a great job of staying within those boundaries. Unfortunately, many budget-followers rely...

John Pasley - September 10, 2012 0
The original Field Runners was a runaway (pun intended) hit when it came out years ago. There’s a good chance you have it downloaded...
© 2022 - Divyashakthysofttech.com . All Rights Reserved.